Advantages of the VenaSeal Procedure for Varicose Vein Treatment

The VenaSeal procedure is a new method of vein closure that has unique advantages over other treatment options. Vein specialist Dr. Dev Batra provides a review of how VenaSeal treatment works and how its advantages might provide a better patient experience.

In our last post, we discussed the advent of minimally-invasive thermal ablation for the treatment of varicose veins. Over the course of the past two decades, thermal ablation has emerged as the gold standard for varicose vein treatment. As heat energy is involved, the procedure generally requires the use of “tumescent anesthesia” - a solution containing a very low dose of lidocaine (a numbing agent). This is to ensure that the patient does not experience any pain from nearby nerves affected by the heat. A combination of image-guided expertise and tumescent anesthesia makes for a very comfortable thermal ablation procedure with low pain scores for most patients.¹

In the past few years, a new minimally-invasive modality for varicose vein treatment has emerged. The VenaSeal system - a bio-adhesive designed for use in the veins - was approved by the FDA in 2015 for the treatment of adults with clinically symptomatic venous reflux / varicose veins.² Similar to the thermal ablation modalities, the goal of VenaSeal is to permanently close down diseased veins. However, unlike thermal ablation no heat is involved in the VenaSeal procedure. As such, no tumescent anesthesia (the numbing agent we discussed above) is required, leading some patients to elect this modality over standard thermal ablation.² The medical community refers to this type of modality as “NTNT”, or “non thermal, non tumescent”.

The VenaSeal™ adhesive is an n-butyl-2-cyanoacrylate (NBCA) based-formulation. The chemistry behind the device, to the surprise of many, is no different than a number of long-standing bio-adhesives used to close surgical incisions, wounds, and lacerations. Kept isolated, the VenaSeal solution is a clear, sterile, free-flowing liquid. Upon contact with bodily fluids (in this case blood inside the vein), the individual molecules of NBCA begin attaching to one another, or as chemists call it “polymerizing”. Within minutes, this creates a solid material within the insufficient vein, which is then surrounded by fibrous tissue by your body’s natural mechanisms - creating a durable occlusion.²

The procedure can take anywhere from thirty to sixty minutes, depending on the length of the vein needing treatment. After expert mapping of a patient’s individual reflux pattern, a catheter is ultrasound- guided to the highest point of reflux. VenaSeal™ adhesive is then injected in pre-specified volumes, segment-by-segment, followed by brief compression of the vein, until reaching the end of the diseased segment (hence why treatment time varies based on the length of the vein segment). Depending on the extent of disease, we may encourage the use of compression stockings following the procedure, however early real-world registry data have demonstrated that compression stockings may not be necessary.³⁻⁴

The next logical question is: how do outcomes for VenaSeal compare to standard thermal ablation? The best answer that we have to this question comes from the VeClose study, a large study in which 222 patients were randomly assigned to either VenaSeal or radiofrequency ablation. At one year, the study showed similar improvement of symptoms, and similar rates of vein closure between the two groups - both groups achieving success rates greater than 95%.⁵ Unpublished three-year data were presented in London in April 2017, demonstrating similar efficacy between the two groups and addressing the lingering concerns about the long-term efficacy of VenaSeal.⁶

No Heat, No Tumescence, Fewer Needlesticks

Thermal ablation devices, such as radiofrequency and laser treatment, work by applying short bursts of focused heat to the inside of the vein that cause the vein to collapse. Over time, the treated vein is replaced by connective tissue as it heals from the thermal treatment.⁷ Many medically beneficial procedures are destructive in nature, so individuals considering treatment shouldn’t find this type of approach alarming. However, thermal treatment does requires certain safeguards to protect patients from the adverse effects of extreme heat - one of which is the use of tumescent anesthesia. Tumescent anesthesia is a liquid that numbs the treatment area while providing a heat conducting medium for the safe delivery of thermal energy.⁷

Covering the entire length of a vein with anesthesia can require several uncomfortable needlesticks. On the other hand, VenaSeal treatment is entirely non-thermal and, therefore, does not require tumescent anesthesia. In other words: fewer needlesticks and a more comfortable procedure.

Another advantage of VenaSeal is that it accomplishes vein closure in a relatively non-destructive way. Medical-grade adhesive is delivered in small increments along the length of the vein followed by brief compression of the vein, not unlike sealing a small straw with super glue.⁸ The non-thermal nature of VenaSeal treatment makes it particularly easy for patients to return to work and resume moderate exercise immediately following their procedure, whereas it can take patients a few days to fully recover from thermal ablation.

Medical-grade compression stockings have long been an integral part of minimally invasive vein treatment. When one of our patients receives an ablation treatment, we recommend that patient to wear compression stockings for 3-5 days following treatment. Stockings help to manage post-operative pain and reduce the risk of procedure-related complications.⁹ Unfortunately, medical stockings are notorious for being uncomfortable. And ditching the stockings early, which is all too common, may stretch out the recovery process.

We’re always looking at new ways to improve the patient experience at Dallas Vein Institute, which is why we’re ecstatic to be one of the first vein clinics in the Dallas region to offer VenaSeal to our patients.

[3] Gibson K., and Ferris B. Cyanoacrylate closure of incompetent great, small and accessory saphenous veins without the use of post-procedure compression: Initial outcomes of a post-market evaluation of the VenaSeal System (the WAVES Study) Vascular, 25(2):149-156. 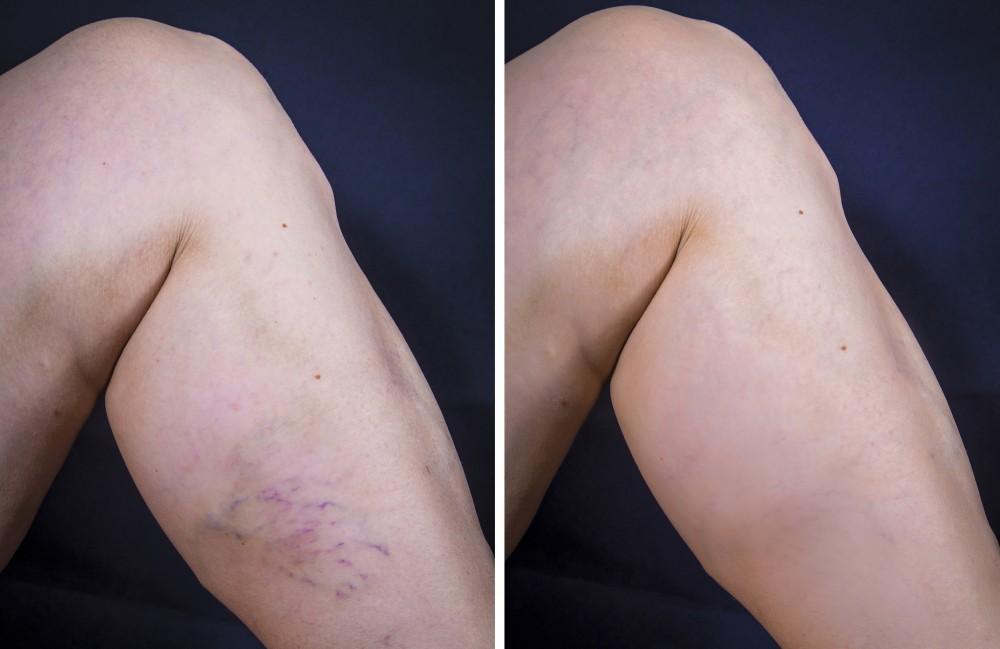 When are Varicose Veins More Than Just a Cosmetic Concern?

Most cases of varicose veins are simply unsightly. They won’t likely develop complications since, while they’re visible through the skin, they’re part of the superficial vein system. Severe cases and deep veins, however, may become health issues.

Compression stockings for varicose veins: are they effective?

Compression stockings have been a standard treatment for varicose veins for many decades, and are still prescribed today as a first-line therapy to manage symptoms and prevent the progression of chronic venous insufficiency (CVI) ...

Venous leg ulcers (VLU) are the final manifestation of what is called chronic venous disease (CVD), and CVD is a complicated process that affects millions of people in the United States and worldwide. Varicose veins are probably the most infamous of ...

Have you ever stood in a line, maybe for an elevator or a roller coaster, and you notice that the line is growing faster than people can move through? The line grows and grows until either: ...

Restless legs are very common in individuals with vein disease. Vein specialist Dr. Dev Batra explains how vein treatment can help with restless legs, and the steps you can take to find out if your restless legs are caused by a vein problem.